Home » Sport » Wake up and sponsor our local football teams

Wake up and sponsor our local football teams 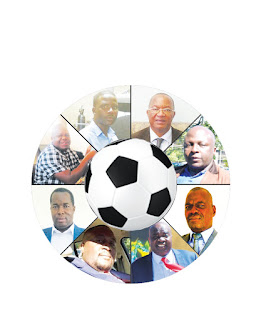 Following the recent story published by TellZim News on corporate world turning a blind eye on sponsoring Masvingo football teams in their quest to quench premier soccer league (PSL) action thirst, local fans suggested potential sponsors whom they think should wake up and support the local football teams.
The city has Mucheke based teams Masvingo United football club (Fc), Masvingo Pirates and the army based outfit United Lions and all the teams have struggled to make ends meet in the previous season.
Masvingo United have appointed a new executive led by former Mayor Hubert Fidze who is expected to bring a change in the way the club operates but the club has no money in their coffers so far and recently released a budget of $248 000.
Masvingo Pirates finished last season getting some financial support from lawyer Phillip Shumba who has shown his unwavering support for football, as he has sponsored a couple of clubs in the city.
United Lions has had few problems in their campaign considering they are in the books of the army and have no expenses on home games, security and ground bookings since they use their Magamba stadium free of charge and also use the army bus for away matches.
Suggestions for potential sponsors include businessman and politician Taguma Benjamin Mazarire, businessman Enerst Mukumba, Titus Gangata of Binum Tyres, entrepreneur Stanley Kondongwe, Noah Marima of Junior Driving School, politician and businessman Edmund Mhere, lawyer Collen Maboke, businessman Setfree Mapuvire, lawyer Rodney Makausi and Masvingo City Council among others.
TellZim News, later on linked up with some of the listed people to hear their views and considerations on the suggestions by the local fans.
Masvingo City Mayor Councillor Collen Maboke said he had already raised a motion in the recent full council meeting held on Monday, January 28, 2019 where he proposed the need to sponsor a football team which was seconded by his deputy.
"I raised the motion in our Monday full council meeting which the deputy mayor Councillor Wellington Mahwende seconded and we are making consultations on whether to fully bankroll a new club or one of the existing teams because we are lagging behind since other cities like Harare have their own teams," said Maboke.
The Megafest businessman of the year Mazarire who once bankrolled Masvingo Pirates before pulling out citing political interference said he has to meet his other business partners before committing to football again but called upon the people of Masvingo to be united first and make one strong team which they all rally behind.
"I need to meet my other directors who are currently out of the country, of course this issue is on our agenda but firstly we have to meet and discuss it so that we make an informed decision.
"As the people of Masvingo we have to put aside our differences, be united and form one strong club. Having done that, sponsors will come because for one to come and sponsor another team while the other is struggling financially they will see you as an enemy and that is not the mentality we need in football," said Mazarire.
Another potential sponsor who was involved with Masvingo City, Marima, said he can't commit himself to football because the players themselves are not serious.
"For now I cannot help them because some of them considered personal benefits and I was disappointed. I tried for a long time but eventually I was disappointed. If players have no view of being promoted into the premier league why should I bother myself," said Marima.
Masvingo fuel businessman and owner of Doczine service station Phillip Mapfumo better known as Phidza said he was making efforts to try and assist local teams which are currently in the Eastern region division one league.
"I will talk to some of my partners and see what we can do for both teams. We will probably come up with something before the season starts," said Mapfumo.
Rodney Makausi a renowned lawyer in the city played down the idea of sponsoring football this year but hinted on the probability of him chipping in after this upcoming season.
"This year my plate is full, I have other commitments but I might commit myself to football maybe later on at the end of 2019," said Makausi.
Mapuvire, the owner of Nyaningwe Supermarkets has been involved with football but at a small scale sponsoring the annually held Nyaningwe Reformed Church in Zimbabwe (RCZ) Bhora Varume tournament which is usually played by members of the RCZ church.
The tournament was launched in 2011 when the City had no representation in the PSL and at one time Mapuvire unveiled $15 000 towards the tourney.
Mhere, a politician and businessman who owns Tsungai and

also runs one of the most decorated private schools in the City, Eddrovale College, is one of the people who have great potential in sponsoring a local football team.
Kondongwe, with his vast business empire, is also amongst the elite league of Masvingo’s successful business minds who can spare some funds for the local football teams and bring joy to the long starved football lovers.
N. Richards Group has a lot of potential to fund Masvingo teams and have them play in the top flight league because the biggest setback remains funding
Recently the Masvingo born speedy winger Gabriel Nyoni completed a move to Caps United after being offered a lucrative deal including a residential stand worth US$20 250 in one of Harare's residential areas.
However local football fans continued their call on the corporate world to open their eyes and start to chip in wherever
Takudzwa Shumbanhete, a local fan said its high time corporates and individuals who have the potential to finance our local teams come on board and make sure we promote the brand Masvingo in sports just like as we are popular in politics.
“It’s high time that our local companies and individuals who have the potential to bankroll local teams come on board. Other cities do have teams in premier league because they get sponsorship.
“Our Masvingo born footballers are the ones who are making headlines at other clubs because our teams failed to meet their financial demands,” said Shumbanhete.
Thomas Dhobha another football lover said businessman in Masvingo should come together and support local clubs.
“We have potential business people in the City that should intervene and support local teams financially to help them on their quest to bring back premiership action back. We cannot have a situation whereby teams from Manicaland always be promoted to play in the league, if they are able to support their own teams, why can`t we have the same situation in Masvingo through the support from business community,” Dhobha said.
The calls come when preparations for division one league and the have already started the city as United Lions Fc expected playing the recently PSL promoted Manicaland based side Manica Diamonds Fc.
Una Una have reportedly started conducting training sessions while Masvingo Pirates players are set to return to the training camp.