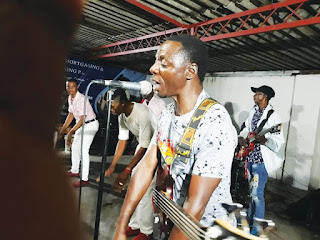 Sungura maestro Alick Macheso was last week overwhelmed by emotions as he performed some lines off the late superstar Oliver Mtukudzi’s Munendipasa manyemwe during a show at Club Lagoon in Masvingo.
Macheso had to give himself some few minutes break to regain control of his runaway emotions before he could carry on with the show.
Mtukudzi died on January 23 after battling diabetes for a long time, putting an end to an illustrious career spanning four decades.
His death triggered days of mourning in the country, and he became the only person outside of politics to be declared a national hero.
Macheso later played the late Tongai Moyo’s Zvinoita murudo in a manner which again brought out strong emotions out of him and his audience.
The King of Sungura also sampled some new offerings which showed lead guitarist Devine Muzenda’s artistic prowess.
A new dance called Chidhindo was also introduced by Jonas Kasamba who has now regained weight and belly that he has always been known of before he left for Orchestra Kwazvose.
Macheso later expressed disappointment that an emerging local Afrofusion band Panhimbe Crew had not been given a chance to warm the stage for him. He then invited the group to visit his studio in Harare.
There had been fears that the show could be cancelled due to Cyclone Idai which was expected to reach the city.
Club Lagoon marketing manager Kudzai Hazangwi thanked patrons for supporting the place through their attendance of the show, saying the club will continue to work hard to improve services.