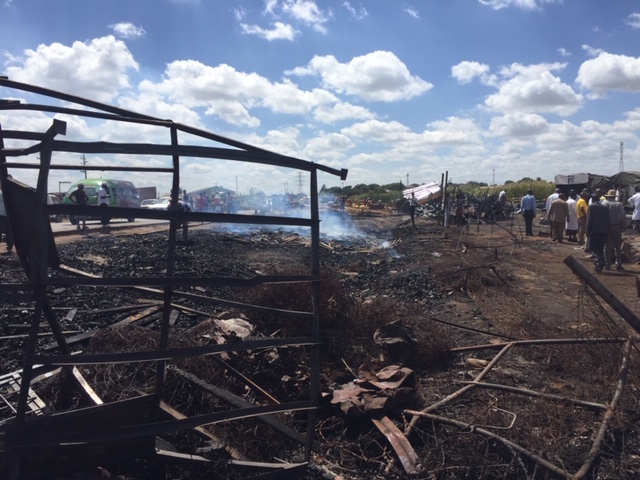 The fire destroyed a large part of the Glenview light industries

TellZim Reporter
HARARE – The Vendors Initiative for Social and Economic Transformation (Viset) has called upon Harare City Council and other responsible authorities to quickly find a lasting solution to the fires that perennially gut the Glen View 8 light industries.
The latest fires are said to have destroyed 6 000 square metres of the complex on March 12, costing the hundreds of small scale business people there tens of thousands of dollars.
The following day, Viset executive director Samuel Wadzai Mangoma and his team toured the area to assess the damage.
“Viset is concerned and alarmed at the recurring fires which keep on destroying the complex resulting in furniture stocks worth hundreds of thousands of dollars being lost. There is need to put closure and finality on this issue by all stakeholders involved because livelihoods are being destroyed and income lost in the fires that have become a frequent happening at the complex,” said Mangoma during the tour.
The following day, Viset released a statement calling upon authorities to, among other things; improve safety at the complex, be pro-active in disaster management and formalise the operations of the informal sector.
“The operations of the complex are not well regulated by the City of Harare as it is run by a cooperative but it is now important for the council to be proactive and provide management services to the place which shall include regulating dangerous activity which may trigger fires and even deployment of fire monitors to the place.
“Viset has long advocated for formalisation of the informal sector so as to increase regulation and standardise operations of the sector. This is now more urgent for Glen View Area 8 complex which would benefit immensely from regulation as it would improve safety and increase income and hence taxes which the government can benefit from,” part of the statement reads.