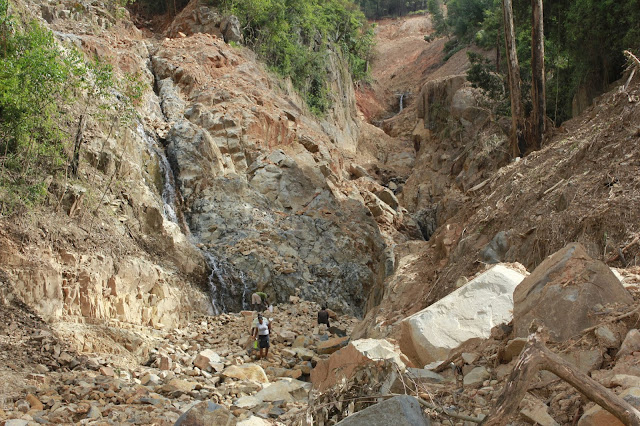 File pic of Idai damage in Chimanimani
Beatific Gumbwanda
CHIREDZI – Parliament’s Standing Rules and Order Committee last week aborted their visit to parts of Chiredzi North due to extremely bad roads that were further damaged by Cyclone Idai.
Many roads in the constituency were badly damaged by the tropical cyclone thereby isolating many people from the much-needed help.
Led by Senator Tsitsi Muzenda and accompanied by Chiredzi North MP Roy Bhila, the committee had to abandon part of much of its itinerary because the roads were not navigable.
Other legislators who were part of the committee were Morgan Komichi, Roy Bhila, Tabitha Khumalo, Farai Musikavanhu and Aliginia Samson.
The cyclone affected mostly Ward 24, Jairezi, where 253 houses were destroyed, according to the Civil Protection Unit (CPU).
The committee, however, only assessed the damage at one roadside home as attempts to drive their mini bus deeper into communities failed.
The team had to disembark twice and push their vehicle through the mud and gullies of the shattered road.
A truck carrying relief supplies also got bogged in the mud and had to be towed out by an army vehicle.
Muzenda later told TellZim News that during their pre-journey briefing, they had received wrong information that they were going to be able to travel into villages.
“We were on a mission to visit affected families and their destroyed homesteads but we failed as roads were impassable. We are however happy that we found an advance relief team distributing donated goods.
“We only managed to visit one homestead by the roadside but we will rely on the District Administrators (DA)’s data that 253 houses were destroyed. We had been informed that we could make it into communities by road but only to find that it was impossible,” said Muzenda.