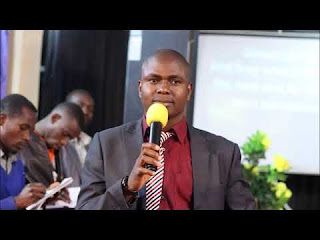 TellZim Reporter
Controversial street preacher Apostle Talent Chiwenga was this afternoon, June 12, involved in a serious accident which claimed three of his passengers leaving him in critical condition battling for his life.
Chiwenga is admitted at Makurira Memorial Clinic in Masvingo.
Chiwenga is said to have been driving a Mitsubishi Shogun when he lost control of the car before hitting a metallic pole and overturning twice throwing two female passengers out of the car.


Kanyuchi is said to have died upon admission at Masvingo Provincial General Hospital.
The accident happened about 53 kilometres from Masvingo towards Harare just after Chatsworth turnoff.
Sources say Chiwenga lost control of his car and encroached the oncoming traffic lane before going off road where he wrestled to gain control of the car for about 70 metres.
Chiwenga is said to have oversteered the car to try and bring it back on the road but it hit a metallic pole before overturning twice and landing on its roof.
Conspiracy theories where already doing rounds on social media alleging an invisible hand in the accident since the preacher, who is related to Vice President Constantino Chiwenga, has raffled some feathers within the corridors of political power using the gospel to fight the status quo.
At one moment, Vice President Chiwenga warned the street preacher that he should not delve into politics hiding behind the word of God.
Just a few weeks ago, a video of Chiwenga daring President Emmerson Mnangagwa to kill him did the rounds on social media.