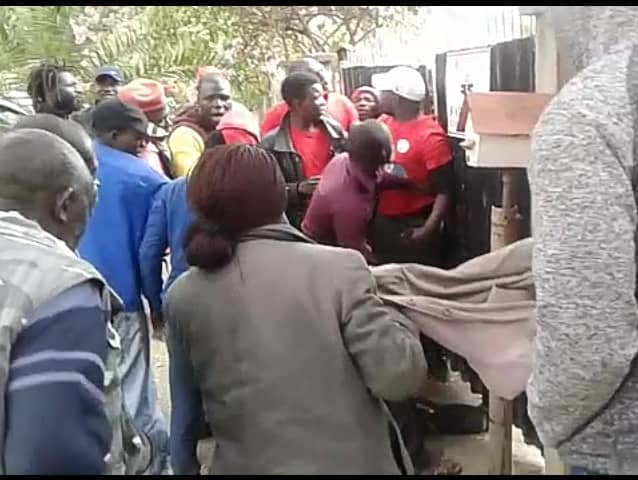 Moses Ziyambi
Apparently terrified by the rowdy behavior of party members who quarreled over how the party should run the selection of five people who will represent Masvingo in the party’s national executive, MDC vice president, Lynette Karenyi-Kore has distanced herself from the elections she was supposed to be presiding over.
Kore and her delegation arrived at MDC Masvingo provincial headquarters at 32 Mukwa St, Rhodene, a while ago amid hostilities from rival camps fighting to control the accreditation exercise.
The short interregnum of courtesy that the fighting camps gave Kore upon her arrival did not last long as the hostilities flared yet again, forcing her to retreat into party offices where she remained locked up with senior members of the provincial executive.
It was again not long before catapults were pulled, punches were exchanged and bricks were thrown as disgruntled party members accused provincial chairperson James Gumbi of trying to rig the poll in favour of his acolytes.
When contacted for comment on her phone, Kore, who was still holed up in the offices, said she was not responsible for running the show even though she came from Harare specifically for that task.
“No, I am not going to be responsible for the accreditation exercise. Please talk to our provincial spokesperson for more details,” said Kore.
Provincial spokesperson, Derrick Charamba gave a curt response when contacted for comment, trying to feign normalcy.
“The presiding officer is our VP Kore and she is here. What disagreements are you talking about?” said Charamba.
Moments later, however, it was announced that the proceedings had been cancelled.

A party youth who spoke to TellZim News said Kore was terrified of the violence and had chosen not to take sides with the factions.

"She read the mood and decided not to take over the accreditation exercise which was already being run by one of the camps as a way of maintaining a measure of neutrality. This was a new low for us as a party. How could we fight in front of our VP and disrespect her like that?" said the female party member.