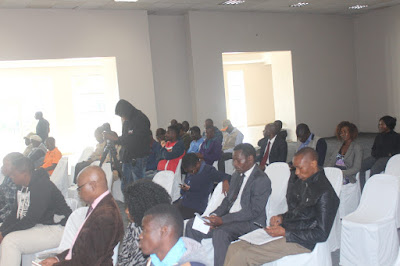 Clayton Shereni
Public hearings on access to national documentation being conducted by the Zimbabwe Human Rights Commission (ZHRC) began on a dismal note in Masvingo today, July 02, with very few people attending what was supposed to be a big and inclusive gathering.
The hearings are being held at Flamboyant Hotel, a place that some people criticised as elitist and not representative of the people whose views the programme ostensibly wants to get.
An hour after the first leg of the hearings began, there were more ZHRC staff and special interest groups in attendance than members of the public, and there was not meaningful improvement in attendance as the day progressed.
Members of the public who spoke to TellZim News said the hearings could have been held at a more accessible place.
“They could have done better if they held the hearings at a place like the Civic Centre gardens which is more accessible to the public. Taking the hearings to a hotel says a lot about the people they want to attend. They are communicating the wrong message. You should know the most convenient place to do your programme if you really want ordinary people to attend,” said one informal trader.
Disability activist, Pastor Calvour Mugwadi said he seldom misses information on activities of that nature and was surprised, therefore, that he did not hear about this one.
“I did not even know there were such hearings of that kind in this city. I am only hearing it from you. Maybe the only people they want to attend are those they knew will make the kind of contributions they want to hear. How can a programme of such importance be conducted without properly informing the public,” said Mugwadi.
Women Coalition of Zimbabwe (WCoZ) Masvingo Chapter chairperson Joyce Mhungu also said her organisation did not know about the hearings.
“We did not know about the programme. We would have wanted many women to attend the hearings because they are critical in children’s ability to acquire identity documents. It also seems the programme is of great interest to people in marginalised communities,” said Mhungu.
However, ZHRC chairperson Dr Elasto Mugwadi said he was overwhelmed by the level of preparedness and cooperation shown by Masvingo province.
“The commission is satisfied with its level of preparedness for the public hearings in Masvingo starting today. The commission appreciates the support received in this province in preparation for these public hearings,” said Dr Mugwadi.
ZHRC is on a programme to gather views on challenges being faced in accessing national documents like birth certificates, national identity cards, passports, death certificates and citizenship.