Home » Local » Politics » We are all thieves, Zivhu admits

We are all thieves, Zivhu admits 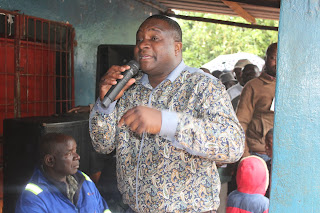 Chivi South Member of Parliament (MP) Killer Zivhu has all but admitted that he and other well-connected ruling party politicians as well as government officials are corrupt and would not miss a good opportunity to steal.
Writing on his Twitter account recently, Zivhu dismissed protestations against corruption in high places, saying anybody would steal as much if given chance.
He argued that those that have never been implicated in corruption are innocent not because they are morally upright, but because they have not had a chance to steal.
“Everyone is a thief as long as there is (sic) nothing to steal u remain innocent (sic) when your time comes to be near what can be stolen tichakuverengaiwo some of u the the only (sic) advantage u have is u are just Zimbabweans without names so no one bothers to write about what u have stolen,” Zivhu wrote.
Zivhu is believed to be a multi-millionaire although he has no traceable business to talk about.
When TellZim News called him to expand on his tweet, Zivhu struck a defiant tone, arguing that he meant exactly what he implied.
“People are good at criticising others yet they have never had an opportunity to prove their integrity. You should first be in a position to steal something and avoid theft before you can criticise others based on unsubstantiated allegations.
“Instead of maliciously pulling each other down, let us rather support each other and move forward. How can you accuse others of being thieves when you yourself are only innocent simply because you have never had a chance to steal anything? You are only a beneficiary of your circumstances,” said Zivhu.
In 2005, he reportedly served jail time after violating his bail conditions while on trial on charges of theft by false pretenses.
Zivhu had allegedly took ZW$4.5 million – a huge sum of money by that time – from a woman affiliated to his association, claiming he was able to procure foreign currency for her but he went on to convert the money to his own personal use.
There are also reports that during that time, Zivhu was facing two other charges of theft by conversion. In one case, Zivhu allegedly received Z$5 million from a Pastor Makore whom he had convinced he could import some unspecified goods on his behalf from Zambia but he allegedly converted the money to his own personal use.
In the other case, Zivhu is said to have received some ZW$6 million from a Mr. Mutano after promising to do a task which was, however, never done.
Zivhu has, however, maintained that he never went to jail, saying he successfully cleared his name with the law and left the country, a period he claims many people became mistakenly convinced that he was in prison.
When TellZim News asked him to clarify his alleged criminal record, Zivhu turned down the request, saying it is the media themselves that should dig deeper and unearth the details.
“I don’t want to talk about that. Do the investigative work yourself and find out the facts. Don’t expect me to give you the details that I am not ready to give,” said Zivhu.
Norton MP Themba Mliswa recently accused Zivhu of defrauding many desperate home seekers of their money through his Galloway residential stands project.

In 2015, Zivhu expressed interest in contesting for the post of Zanu PF Masvingo provincial chairperson, but backtracked in light of the intriguing factional dynamics in the ruling party at that time.
After the 2013 harmonised elections, Zivhu served as chairperson for Chivi Rural District Council (RDC) after being elected Ward 31.
Zivhu is the chairperson of the Zimbabwe Cross Border Traders Association (ZCBTA) and was in August 2016 elected Association of Rural District Councils (ARDC) president.
In September 2017, Zivhu was elected ZLGA leader, taking over from former Bulawayo mayor Martin Moyo.