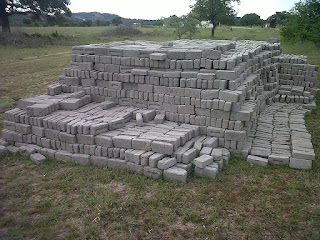 Bricks molded in 2014 had been lying idle until now

Gutu South Member of Parliament (MP) Pupurai Togarepi is investing part of the $50 000 Constituency Development Fund (CDF) allocated to him by parliament to resume work on a clinic project in Ward 28 which will help thousands of villagers to get easier access to health services.
A committee was formed to supervise mobilisation of locally-available materials needed for the clinic to be built, with villagers recently using their scotch carts to transport river sand from a nearby stream.
Ward 28 Councillor Johnson Nhema said he was pleased that work had at last been resumed at the project site which had become a painful heartbreak for close to five years.
“We are pleased that much of the resources needed are in place to build and complete the clinic. We are happy that our MP has realised the importance of this clinic to people of this ward and other surrounding areas.  This is the development we yearn for and the community has pledged to support the MP in his efforts to improve their lives. We all know he could have chosen to use the money elsewhere if he wanted. There are many deserving cases in Gutu South,” said Nhema.
Villagers told Tell Zimbabwe Togarepi had pledged to build a decent house for nursing staff using his own money while the CDF allocation is being spent on the main clinic building.
Toilets have already been built and villagers said they looked forward to all work being completed before the end of 2020.
The closest health centres at the moment are Mukaro Mission Hospital, Chitando Hospital and Cheshuro Clinic, all of which are at least 10 km away.
The project was initiated back in 2013 but work stalled in 2014 as factional battles in Zanu PF claimed the scalp of then Gutu South MP Dr Paul Chimedza.
Chimedza was fired from his government post of Health deputy minister and was also suspended from conducting party activities for allegedly aligning himself with then vice president Joice Mujuru’s so-called Gamatox cabal which was accused of plotting to unconstitutionally seize power from then president Robert Mugabe.
Insurance giant Old Mutual, which had reportedly agreed to bear much of the cost of building and equipping the clinic, beat a hasty retreat fearing the consequences of being seen to be working with members of the ostracised cabal.
Initial designs for the clinic had intended it to be solar-powered as well as to have a solar-powered borehole and a few maternity beds.
There had been no progress at the project site for all those years until now, with many of the 50 000 bricks which villagers had molded and transported getting damaged.