Newly appointed chiefs have no power to apportion land 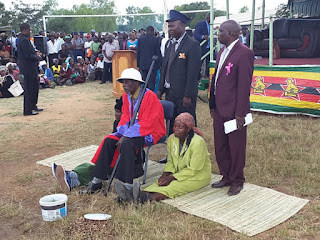 MASVINGO – Masvingo Provincial Development Coordinator (PDC) formerly known as Provincial Administrator (PA) Fungai Mbetsa has said newly-revived chieftainships in formerly white settlements have no power to distribute land.
Some of the newly-revived chieftainships in the province are Bere, Nemamwa and Neromwe and Musara.
These chieftainships are in resettlement areas that were created after the Land Reform Programme displaced white settler farmers.
Mbetsa said the chieftainships were there only to uphold cultural values and harmony through solving social and cultural disputes between people in his area of jurisdiction.
“The Ministry of Lands through relevant departments is responsible for giving people land and the chief will only solve disputes among people who were put under his area by the ministry. He has no power to give land because it is feared the resettlement areas will be turned into communal areas,” said Mbetsa
He said the chiefs, however, had power over the selection of village heads and headmen in their area of jurisdiction. He said the village head and headmen will have similar roles to play but only at village level.
“The chiefs can appoint village heads or headmen through the required procedures and they will also bring peace among their subjects through presiding over domestic disputes in their areas of jurisdiction,” said Mbetsa.
Chiefs and village heads in many areas are being reported to be selling land especially those near growth points and main roads.
Village heads around Nemamwa area have been accused of doing so and those around Jerera in Zaka are also said to be selling stands in areas meant for the expansion of the growth point and efforts by the local authority to stop them seem be failing.