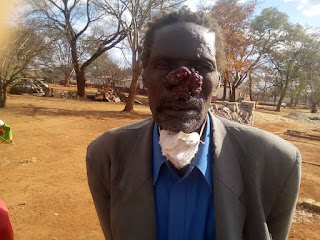 Muzenda Matake
Cephas Shava
MWENEZI - An elderly man from Ward 13, Mwenezi East, is suffering from a cancerous condition which has completely savaged his nose, leaving him to breathe only through the mouth.
The swelling occasionally raptures in a painful manner and the bloody substances that come out of it block what is left of his nostrils.
TellZim News caught-up with the unemployed Muzenda Matake who hails from headman Mungoni under Chief Chitanga.
Matake said he had visited a local clinic when the problem had not yet become as much pronounced but had not got much help.
He said nurses referred him to a private doctor in Chiredzi but he could not raise the money needed for the treatment.
“When I visited Damarakanaka Clinic they did not give me any treatment but they referred me to Chiredzi where I saw a private doctor who wanted money which I failed to raise. I am just an unemployed man and I cannot afford to raise the money for the treatment,” said Matake.
The elderly man, who was visibly in agony as he narrated his condition, said his health problem started sometime in 2014 with a small pimple in one of his nostrils.
The pimple continued to bulge and in March this year, it got out of hand; completely blocking his nostrils and making it impossible for him to breath.
“Nurses could not tell me what caused it. I was just advised to clean the ulcer using salty water but there is no sign of healing. I even tried to get help from traditional healers and prophets but all in vain.
The situation is getting worse each passing day. For many weeks now, I have been using my mouth to breath. Walking is becoming problematic and my only hope is for well-wishers to help me get medical attention,” said Matake, whose wife is disabled.