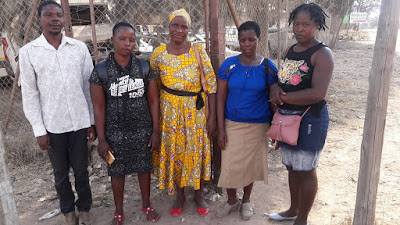 Claris (right) with her family members

…woman emerges from under water after two weeks
Elliot Jinjika
CHIVHU- In a stranger than fiction case, a 34-year-old woman from Zenda village under Chief Makumbe in Buhera claims that she was whisked away by a paranormal whirlwind into a deep cave while taking a bath in Sebakwe River only for a self-styled Chivhu prophet popularly known as Madzibaba Edborn to come to her rescue.
Claris Chuma narrated her ordeal to TellZim News in the company of her four family members; her mother, aunt and two siblings.
She broke into tears as she described how she spent two weeks under water with strange being that she described as mermaids.
Chuma said she was whisked away by a strong whirlwind in the company of her sister as they bathed in the river.
She said she found herself deep in a strange cave in the company of three mermaids; long-haired beautiful women with half human and half fish bodies.
“I and my sister Melody had visited our uncle and we decided to take a bath in the river. Melody saw a fish and we decided to try and catch. In trying to do so, an unexpected whirlwind whisked me away and took me into a deep cave underneath the water where I found three ladies who had half human and half fish bodies.
“I survived for the two weeks eating raw fish and the ladies threatened to kill me I refused to eat them so I had no option but to listen to their orders,” Chuma said.
In the normal world, her younger sister Melody and other family members spent all the time trying to get assistance from different prophets with some of them telling them that Claris was already dead.
Another prophet demanded two cattle in order to bring her dead body back.
“We visited many prophets who told us that she had been taken by a mermaid but none of them had any good news for us. They all said she was already dead and another one demanded two beasts so that he could help bring my sister back. We then became luck and came across Madzibaba Edborn who upon hearing our issue, said he was going to help us free of charge,” said Melody.
The family said on Sunday October 06, Madzibaba Edborn in the company of the family and some church members went to the scene where a mini service was held.
Claris then appeared floating on top of the water and the prophet instructed the family members to spit on her body so that she could regain her consciousness.
“The mermaids told me that I had to return home as some people were looking for me. They handed me a basket and an arrow with a lot of medicines and instructed me to heal people and return with gifts of money at the cave as thanksgiving. I was shocked to see people gathered around with my family present and my body was so powerless. The prophet then burnt the basket to ashes and I don’t know how to thank him for saving me,” said Claris.
Angeline Nyamande, Claris said he did not have enough words to thank the prophet for serving her niece.