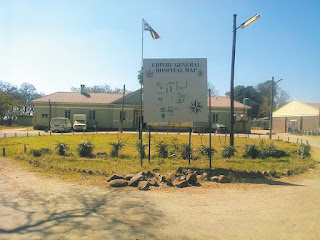 …hospital becomes place for prescriptions only

CHIVHU - Things are not going on well at Chivhu General Hospital where power cuts have affected operations and a severe lack of adequate water has put the lives of patients in further danger.
The hospital is also struggling under a severe shortage of basic equipment and drugs like syringes and paracetamol.
The hospital serves the whole community of Chivhu and all the resettlement areas around the small town.
As a result of the crisis, many patients are returning home without getting the required medical help on a daily basis.
TellZim News recently paid a visit to the hospital and managed to speak to some patients who said they were there simply for the sake of it.
“There are no drugs here and we have been given prescriptions and we need to buy the medicine on our own. There is no electricity most of the times and all services have been hindered by power cuts. The X-ray is not in operation, the laboratory is not working and the theatre too is not working,” said one patient as he limped home.
An expectant mother said she had been told by a hospital employee to get help elsewhere as her chances of dying in labour at the hospital were way higher than what is ordinary.
“I met a hospital employee who advised to get assistance elsewhere because it was not safe to use the maternity ward here,” said the expectant mother.
A staff member who spoke to TellZim News blamed power cuts, shortage of equipment and drugs, low levels of morale among employees and lack of adequate water for the carnage at the hospital.
“The lab cannot function without power and most notably the mortuary. The mortuary needs electricity always hence we are in a complete state of paralysis. The CSSD department is not properly functioning and activities in the theatre have been disturbed. We have a solar system but it’s not working properly. Add all that to the grievances of doctors and nurses and you have a complete catastrophe,” said the employee.
Another source said the hospital’s solar system contract was awarded to a dubious company which failed to do the work properly, leading to below normal power being generated.
“The solar system produces power only for the lights. We heard that had the work been done properly, we wouldn’t be facing a crisis of this magnitude,” said the employee.
Chivhu Hospital Medical Superintendent Dr Alice Kanyemba was out of office and could not be reached for comment.