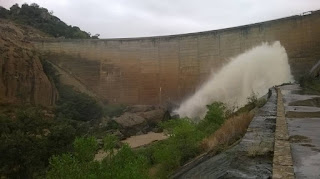 Manyuchi Dam is a white elephant despite widespread poverty in Mwenezi

…as cotton farmers reject RTGS dollar
Cephas Shava
MWENEZI - People from outside Mwenezi are reaping ‘excessive’ benefits from the available vast natural resources in the district at the expense of locals who continue to wallow in abject poverty.
These concerns were raised recently by Chivi-Mwenezi Sanator Clara Shumba while addressing farmers from across the district who gathered at the Rutenga Cottco Depot.
In her address, Shumba regretted that locals continued to wallow in miserable poverty while those from outside the district were becoming rich owing to what she claimed were inequitable resource allocation priorities.
“I once asked the minister (the Minister of State for Masvingo Provincial Affairs Ezra Chadzamira) over these issues. In Mwenezi district, we have vast resources but unlike in other districts where locals benefit from their own resources, the people here are poor.
“As I speak, we are all aware that vast tracts of land here are owned by people from outside the district yet locals have nothing to show. This is very retrogressive in as far as promoting the district’s sustainable development is concerned,” said Shumba to a loud applause from gathering.
On their part, farmers rejected payment for their produce in the country’s currency known as the RTGS dollar, demanding that they instead be paid in the US dollar.
Farmers attacked what they considered to be discriminatory payment processes, saying tobacco farmers were being paid in US dollars for their produce.
“The RTGS money is completely useless such that paying us using it is tantamount to day-light robbery. We need payment in the form of hard cash and not electronic money. For us cotton farmers who are paid in local currency, we feel government is segregating us, given that tobacco farmers are paid in US dollars,” fumed one farmer.
Mwenezi East Member of Parliament (MP) Joosbi Omar and Shumba promised to swiftly forward the farmers’ concerns to responsible authorities.