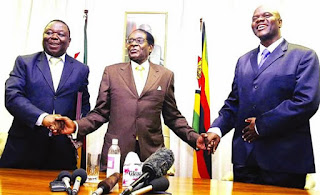 The period covered has been characterized by tense political and economic situations. The article will also delve into the implications of power politics towards the welfare of the generality of Zimbabweans. The old adage which says “When two elephants fight grass suffers rang true to the writer in as far as the period from 2008-2018 is concerned.

The writer is also going to pin point the consequences of controversial elections in Zimbabwe as well as comparing the holding of elections during the two epochs thus during the Mugabe  and Munangagwa era. The need for Zimbabwe  in the post Mugabe to alienate itself from power politics and went a step further even to imitate Mugabe and Tsvangirai and Mutambara’s initiative for a power sharing deal which managed to provide relief to Zimbabweans is also going to be discussed. The significance and stumbling blocks towards a union of convenience between Munangagwa and Chamisa are also going to be unveiled.
The writer noted political turmoil aftermath the controversial 2018 elections and economic crisis taking a center stage in the day to day basis.  The economic crisis manifested itself through petrol queues, cash crisis, price hikes and inflation and the writer depicted the retrogressive nature of power politics towards the prolonged suffering of the Zimbabwean populace.

A PRELUDE TO POWER SHARING DEAL
In 2008, elections were held in Zimbabwe with two main warring political parties at loggerheads that is the MDC –T led by Morgan Tsvangirai and the Zanu PF led by Robert Mugabe. The political and economic crisis that bedeviled Zimbabwe during 2008 gave an impetus for Zanu PF and MDC-T and MDC-M to engage in an endeavor to ease people’s lives.
Raftopolous (2013) notes that the economy was in a worst condition of the post-colonial era with hyper-inflation, unemployment, failure of state services, massive human displacements serving as major indicators of this crises. Raftopolous and Mlambo (2009) noted that hyperinflation reached an official level of 230 million % by the end of 2008, devaluing both earnings and savings.
Mutambara (2018) notes that under Mugabe’s rule, inflation has soared and basic commodities have disappeared from the market. Edwin Tsvangirai cited in Newsday May 6 2019, pleaded with the two political protagonists to talk in the interest of the nation. He said, to save the country from further collapse, opposition leaders must draw lessons from Tsvangirai who between 2009 and 2013 worked hand in glove with his rival Mugabe in a coalition government.
Setting aside power politics and dialogue in the interest of the generality of people proved to be the remedy towards resolving crisis in Zimbabwe.
According to Paulo Freire (1968), the object of dialogical action is to make it possible for the oppressed by perceiving their adhesion, to opt to transform an unjust reality. The extreme nature of the growing political, economic and humanitarian crisis in Zimbabwe in 2008 exacerbated by the contested June 2008 Presidential elections added new urgency to the mediation discussions and on 21 July a Memorandum of understanding was signed by three parties (Raftopolous 2013).
Alexander Jocelyn et al (2014) state that despite winning the 2008 elections, the MDC agreed to a power sharing deal in which they were in practice subordinate partners.
Masunungure (2009) notes that between March and June 2008, Tsvangirai’s party had its electoral support base broken by all-night indoctrination vigils, intimidation, public beatings and displacement. On Tuesday 20 March 2007, the Zambia’s Levy Mwanawasa likened Zimbabwe to a sinking titanic whose passengers are jumping out in a bid to save their lives. The Global Political Agreement (GPA) in 2009 has managed to be a short- term panacea for the country’s economic woes and political crisis.
Tatenda Freeman Murenjekwa is a holder of Bachelor of Arts Honors Degree History and he writes articles for educational purposes.