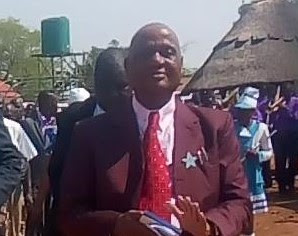 Emmaculate Mukokoromba
ZAKA – The controversial Zion Christian Church (ZCC) leader Bishop Nehemiah Mutendi has busted MDC leader Nelson Chamisa’s presidential bubble saying the young politician is a puppet of the West who are using him as a front to recolonize the country, while ordaining President Emmerson Mnangagwa as the rightful king send by God.
Speaking during the Chief Nhema senatorship festival recently, Mutendi said there is a difference between a king and a rightful king saying the latter comes from God.
Mutendi, whom many questioned whether his message was coming from the spiritual realm or his head, said that Chamisa still has a long road to travel to be the rightful king for the country as he lacks the merits of a true leader.

“The whites are still bitter that we took our country from them. They have for long tried to make their way back into the country but have failed so they have now devised a new strategy to retake our country using a puppet Chamisa.

“Do not be fooled with the opposition because they are being used by the whites who have a hidden agenda. They know they will not be able to have their way in this country with Zanu PF in power which is why they have chosen Chamisa.

“This is why we have sanctions and all these problems which are being caused by Chamisa. Do not blame the government because it is trying to better the lives of its people though it will not happen overnight,” said Mutendi.
Mutendi said the people of Zimbabwe have faith in the ruling Zanu PF party and have shut out Chamisa because they know he is not right for the country.

“The people of Zimbabwe know that MDC is a project of the West which is why they fail to win elections. The people do not want Chamisa to rule the country because they know the whites will come back and occupy our land.

“For person to be a right king, he should learn first the history of the country and appreciate it from those in power. Chamisa does not know the history of this country and cannot be the right king," said Mutendi.
Mutendi said the reason why the opposition has failed to take over power from Zanu PF is because no man can fight what God has chosen and be successful.