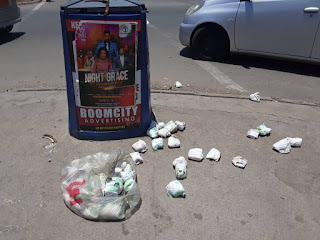 City of Masvingo is not paying much attention to the safe disposal of sanitary pads and diapers, with many residents dumping these environmentally harmful materials anywhere.
Besides the impact of that such material has on the environment, the general sentiment is also that failure by authorities to build incinerators at strategic places in the city has a negative effect on women’s right to dignified disposal of their used sanitary wear.
Women’s rights advocates and environmentalists who spoke to TellZim News said the presence of used sanitary wear and diapers in the open surroundings was an affront the environment as much as it was an attack on the dignity of women.
Women Coalition of Zimbabwe (WCoZ) Masvingo provincial chapter coordinator, Belinda Mwale said refuse collection challenges in the city meant that many used diapers and sanitary pads end up on the streets, in the drains or in water bodies.
“The main challenge we are facing is that we don’t have the knowledge of how pads should be properly disposed, and neither do we have enough resources to enable their safe disposal. If we are to burn the pads since refuse collection schedules are not reliable, we would surely be violating one or two environmental laws and by-laws,” said Mwale.
She said the right to a safe period for women was not an end unto itself as it should extend to dignified disposal of the sanitary wear
“Inadequate water supply is another challenge we face. If we were to get reusable sanitary pads, that would both be more cost effective and environmentally-friendlier but there is no enough water to wash the material all the time,” said Mwale.
A Mucheke woman who spoke on condition of anonymity said she felt uncomfortable throwing her used sanitary wear in the average rubbish bins due to some superstitious beliefs she grew up to know.
“We I grew up, we would be told that used sanitary pads could be used by juju people for malicious reasons. I therefore do not dispose of them in the bin. I always flush them down the toilet even though I know that they clog the sewer systems. I would be confortable throwing them in an incinerator,” said the woman.
A Masvingo City Council employee revealed that local authority spends thousands of dollars every month removing grit from its sewer systems, and many sewer pipe bursts are recorded everyday due to blockages caused by many alien objects including sanitary pads and diapers.
Former mayor Hubert Fidze has been very vocal about the effects of disposable nappies on the city’s water supply, complaining that the unchecked use and irregular disposal of that material was seriously polluting Mucheke River and ultimately Lake Mutirikwi, from where the city draws all its drinking water.
Other residents said council could engage huge institutions like Great Zimbabwe University (GZU) so that they could partner to build incinerators at strategic points for use by both residents and students.
“The council is not playing its role. They come after two weeks or more for refuse collection and this results in diapers being thrown around. There are many stakeholders like institutions of higher learning and private companies that can be engaged for the building of incinerators,” said one resident.
When contacted for a comment the City of Masvingo Department of Environmental Health acting director Ngonidzashe Mapamula refused to comment.