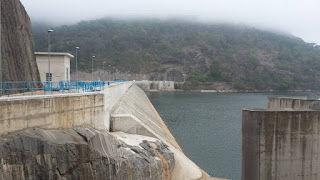 The giant Tugwi- Mukosi dam project which is estimated to have cost close to half a billion dollars risks being a white elephant with the government failing to come up with its master plan three years after completion.
When it was completed in December 2016, Tugwi-Mukosi formerly Tokwe-Mukosi, became the largest inland dam in the country with the capacity to irrigate about 30 000 hectares of land and generate over 15 Mega Watts of hydroelectricity.
Former President Robert Mugabe officially commissioned the dam on May 18, 2017 and promised Masvingo province that it would benefit enormously on agriculture and other business ventures but to date, nothing has materialized.
The former president promised that the Tugwi-Mukosi Dam master plan would be expedited but he was removed one year later by his long term allies before delivering on that promise.
It is two years now under the President Emmerson Mnangagwa-led ‘new dispensation’ and Masvingo province still awaits for the master plan.
The master plan will designate land use patterns in and around Tugwi-Mukosi dam.
Minister of State for Masvingo Provincial Affairs Ezra Chadzamira says that the master plan will be unveiled within the first quarter of 2020 as the government has cleared the US$200 000 debt owed to the South African consultant to complete the master plan.
“Work on the master plan had been affected by delays in the payment of about US$200 000 to the consultant to complete the work.
“We are very excited that the Tugwi-Mukosi master plan will soon be out after the consultant doing the job was paid,” said Chadzamira.
He said if all things go as per the plan, the Tugwi-Mukosi master plan will be out in March and the dam will be fully utilised.
“By the end of the first quarter around March, the master plan will be out and we hope everything will move according to plan.
“Our cry has been over failure to fully utilise Tugwi-Mukosi Dam despite its huge potential to change lives of our people, but now we are on track.
“We are very grateful to President Mnangagwa and his government for making sure work on the master plan is completed,” said Chadzamira.
Masvingo province still suffers from the effects of drought despite housing the two biggest inland dams in the country, Lake Mutirikwi and Tugwi-Mukosi.
Tugwi-Mukosi dam was mooted in the 1960s by the Rhodesian government but the contract commenced in April 1998 with a planned construction period of four years stretching from 1998 to 2002.
However, works were suspended in 1999 due to shortage of funds. The project then went through start-stop phases from 2001 to 2005.
Construction then commenced in May 2011 with plans to complete the project in November 2013 and plans to start impounding water in November 2013.
Due to funding constraints, the project went through some delays but the government cleared all outstanding arrears to the contractor by October 2016.
TellZim News established that the government has not been honest with the people as to the initial cost of the project.
It has been established that the project could have not been realized had it not been for Tongaat Hulett Zimbabwe which paid for the last phase of the project.