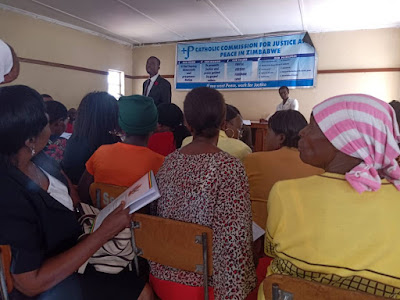 ...as ZHOCD calls for active citizen participation in constitutional matters

MASVINGO  - Zimbabwe Heads of Christian Denominations(ZHOCD), which consists of Zimbabwe Council of Churches (ZCC), Catholic Commission for Justice and Peace for Zimbabwe (CCJP), Evangelical Fellowship of Zimbabwe (EFZ), Zimbabwe Catholic Bishops Conference (ZCBC) and UDACIZA gathered at St Peters’ and Paul Cathedral to increase awareness on the amendments that government wants to effect on the Constitution.
Several stakeholders including representatives from the police, army, prison services and various Civil Society Organisations (CSOs) participated in the interactive proceedings.
CCJPZ national director, Paul Muchena said it was critical for civic to be actively involved in civic issues that impact the nation.
“It is pivotal that citizens of this country take part in these kinds of discussions. The Constitution is the supreme law of the land and whatever citizens and their leaders decide to do with it must be in the open. We therefore appreciate this collective effort by ZHOCD to create this platform,” Muchena said.
People were put in seven groups of youths, religious leaders, CSOs to discuss various aspects of the proposed amendments and make presentations to the whole gathering.
From the proceedings, it became clear that many people opposed almost all the proposed amendments, with others saying the changes would reverse democratic gains and entrench too much power in the President.
The youths suggested that it was imperative for government to advance the national interest by implementing all provisions of the Constitution, rather than make wholesale amendments only a mere seven years after the document was adopted.
“As the youth we are not convinced why there is need to amend the constitution. We need power and rights of full representation of young people in parliament. As the youth we also deserve the chance to campaign for political office and not wait for appointments. As for amending the term “removal of President”, if the government really feels it’s a matter that deserves attention, they should actually add similar translations of the term in Shona and Ndebele because if a President is doing his job properly, he will not be removed,” said a youth representative.
Other groups criticise plans to remove the running mate clause, saying such a move would reverse attempts to democratise the vice presidency.
They said it was not proper to amend the Constitution when it has not yet been fully implemented.