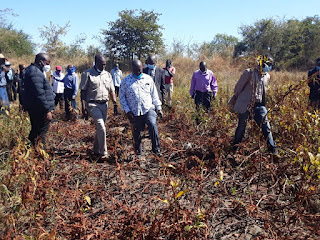 MASVINGO – Farmers at Mushandike Irrigation Scheme have told the Deputy Minister of Agriculture Douglas Karoro that illegal settlers who occupied their grazing lands were a threat to the resuscitation of the scheme.

Karoro visited the scheme on a ‘look and learn’ tour as government plans to build a canal which will channel water from Muzhwi Dam in Mashava to complement Mushandike Dam which is failing to supply enough water.

The scheme’s chairperson Denhere Bhusvumani said if no action is taken against the illegal settlers then the plan will not succeed.

“We have our friends who occupied our grazing lands. We should now be focusing on cattle to survive since we have no adequate water for crop farming. If you do not remove them, even the canal plan will be difficult to implement because some of them are settled along its envisaged route.

“Before they came, we could let our cattle enjoy free reign on the veld but we can no longer do that now because of these people. We have to tend our cattle the whole day.

He said they were serious farmers who required not food handouts but an enabling environment to thrive.

“Give us water and leave us, we are not used to surviving on food handouts. We only need to be provided with water and you need to address the issue illegal settlers. That’s all,” said Bhusvumani.

Karoro assured the famers that they were looking into the issue of illegal settlers as well as mapping a way to construct the canal from Muzhwi Dam.

“We will deal with the illegal settlement. From here we are going to sit and agree on the time frame to start constructing the canal. All the relevant authorities will get copies so that each one them gets to play their own role,” said Karoro.

The Minister of State for Masvingo Provincial Affairs Ezra Chadzamira warned village heads not to sell land and assured as they were not authorised to do so.

“You must report illegal settlers in time because if government destroys their homes now, we would be accused of all sorts of things. We now have to look at how best we can deal with the issue for the benefit of all,” said Chadzamira

The irrigation scheme, which closed down in August 2019 due to water shortages, is divided into 11 blocks with more than 800 farmers.

Indications are that if a canal from Muzhwi is constructed, it will supply water to an area three times bigger than the current scheme.