Mimosa praised for fight against Covid-19 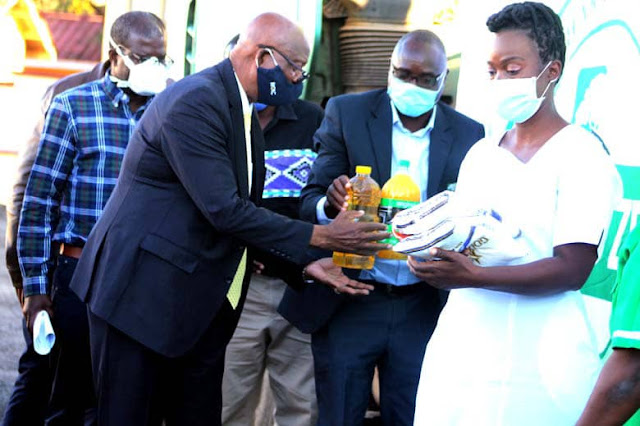 A total of 1 191 nurses and members of staff in 54 health institutions in Zvishavane and Mberengwa district received the food hampers.

Speaking at a handover function held at Zvishavane District Hospital, the Minister of State for Midlands Provincial Affairs and Devolution Larry Mavhima applauded Mimosa for the gesture.

“I am really impressed with what I have seen here. I am proud of Mimosa because we have always had a good working relationship from the time I was Member of Parliament (MP) for Zvishavane-Runde.

“To date, they still continue with their good work of taking some responsibility in the communities that surround them. They have extended their hand even beyond Zvishavane and Mberengwa, and we have heard about the work they are doing in Beitbridge, Harare and Bulawayo international airports,” said Mavhima.

Speaking at the same function, Peter Mutombeni who stood in for the General Manager Alex Mushonhiwa, said the company wanted to reward the sacrifice being done by nurses and other staff members in hospitals and clinics.

The platinum giant has been at the forefront in the fight against the spread of the Covid-19, procuring port health surveillance equipment for all ports of entry. The equipment includes seven Flir C3 Thermal imaging system sets and a Flir E53 EXX Series set.