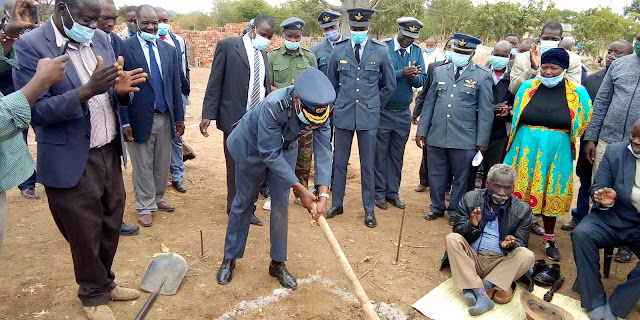 CHIREDZI - The Air Force of Zimbabwe is set to construct a new clinic close to Masimbaavanhu Primary School in Chief Neromwe’s area, TellZim News can report.

There was a ground-breaking ceremony at the clinic site which was attended by AFZ Commander Air Marshal Elson Moyo and other officers, members of the Masvingo provincial leadership as well as Chief Neromwe (born Clemence Madzingo).

The clinic will be built under the Commander Air Force of Zimbabwe Charity Fund which was formed in 2011 to mobilise resources for less privileged people and communities in Zimbabwe.

AFZ is in partnership with local universities to undertake needs assessment studies as well as tap into the knowledge of officers in order to identify deserving people and communities.

The organisation’s intervention in the Neromwe area was facilitated by Chief of Staff Supporting Services, Air Vice Marshal John Nzvede who was born in the neighbouring Zaka district.

In his address, Air Marshall Moyo said he was glad that his organisation was involved in a developmental project of that nature.

“Our main aim is for communities to know about the Air Force of Zimbabwe and our duties, in order to motivate their children to join our force. This community was chosen after considering that it is a resettlement area which lacks many facilities.

“Air Vice Marshal John Nzvede helped the Air Force of Zimbabwe in selecting this area, which he said got back its chieftainship recently but lacked proper health facilities,” said Air Marshal Moyo.

Moyo also said he was pained to learn that people in Masimbaavanhu travelled more than 80km to access the nearest health facility.

Speaking at the same event, the Minister of State for Masvingo Provincial Affairs and Devolution, Ezra Chadzamira urged Chiredzi Rural District Council (RDC) and the District Development Coordinator (DDC) to mobilise resources for the construction of staff quarters and maternity waiting rooms.

“I am most pleased that the Air Force of Zimbabwe has chosen to support and empower rural communities around Neromwe, here in Chiredzi district,” said Chadzamira.

AFZ is working in partnership with Sakunda Holdings, Beta Bricks, Green Fuel, Tongaat Hulett Zimbabwe and Exodus and Company to carry out the project.