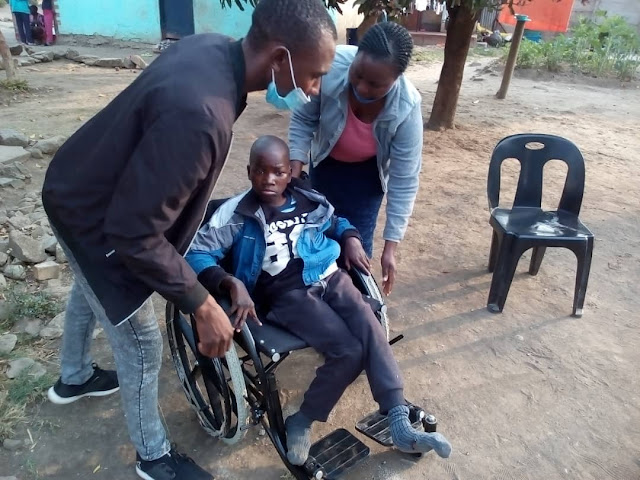 A 15-year-old disabled boy from Mucheke in Masvingo was last week given a new lease of life by the People to People Organisation Zimbabwe which bought for him a brand new wheelchair.

Anesu Nyasha Zvinake, who was born paralysed on his lower body and has speech difficulties, beamed with delight when City of Masvingo Town Clerk Edward Mukaratirwa presented him with the wheelchair.

Mukaratirwa also serves as patron of People to People Organisation which has of late been involved in a number of charitable activities.

Anesu’s mother Mary Tungamirai said her son had never missed a chance to remind her that he needed a wheelchair so that he too could move around more freely like other children of his age.

“Anesu wanted a wheelchair so much that he would try saving a few coins he got from well-wishers towards the cause. He wants to be free and adventurous but he faces serious limitations since he could only do that when I carried him out of the house and walk around with him,” said Tungamirai, who got widowed a few years ago when her husband died in a vehicle traffic accident.

In his remarks, Mukaratirwa said it was through acts of kindness and compassion towards others that people could become really free.

“These are the kind of cases that should jolt all of us into action. As People to People Organisation Zimbabwe, we could not simply sit back after learning about the condition of Anesu. Many people and organisations put their heads together and made contributions that made the purchase of this wheelchair possible,” said Mukaratirwa.

He thanked Profmed, a company which specialises in the sourcing and distribution of medical consumables and equipment as well as rehabilitation and physiotherapy equipment, for taking a lead in the initiative.