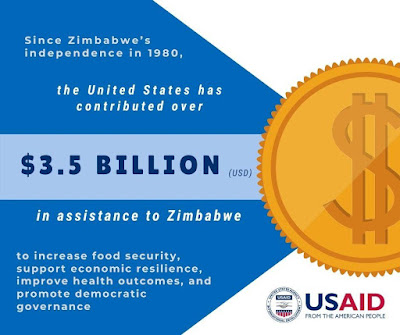 The United States Agency for International Development (USAID) has announced two new food security programs, Takunda and Amalima Loko that are meant to help fight hunger in the country.

These five-year programs, which were announced on October 21, will target nearly 490 000 Zimbabweans in Matabeleland North, Masvingo, and Manicaland provinces.

“These two new programs will build on the United States’ investment in Zimbabwean people and tackle the root causes of food insecurity and poverty by assisting almost a half a million vulnerable Zimbabweans to transition from humanitarian assistance to resilience and self-reliance,” said USAID director Art Brown.

Under Takunda US$55 million will be spent to feed more than 301 000 vulnerable people through CARE International in Chivi and Zaka in Masvingo as well as Buhera and Mutare in Manicaland.

The program is also meant to empower women and youth to create sustainable livelihoods, improve agriculture practices and technology, and strengthen the governance and management of community assets and infrastructure.

Under Amalima Loko, US$75 million will be spent to improve food security for more than 188 000 food insecure citizens in the Matabeleland North districts of Tsholotsho, Lupane, Nkayi, Hwange, and Binga. The job will be done through Cultivating New Frontiers in Agriculture.

Since independence in 1980, the United States, through USAID, has contributed over $3.2 billion in assistance to Zimbabwe in such areas as food security, economic resilience, health systems and services, and good governance.