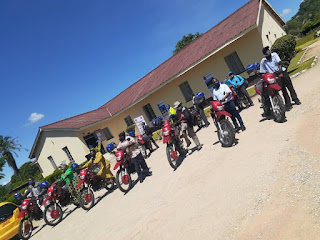 BIKITA – In a move widely viewed as a positive stride towards effective service delivery and engagement between policy makers and the electorate, Bikita Rural District Council (RDC) has taken delivery of 32 motorbikes for their councilors

Most councilors in rural areas face mobility challenges which in turn reduces interaction and engagement but the move by Bikita RDC, if not abused, will bridge the gap.

The motorbikes were purchased in December last year with the money from the local authority’s Umkondo Safari income generating project.

Councilors would have to pay for the motorbikes in instalments for a period of up to 30 months.

Bikita RDC Chief Executive Officer Peter Chibhi said the motorbikes will be used by councilors to effectively carry out their duties in their wards.

“Transport was one of the major challenges among our councilors. They couldn’t travel around their wards and assess areas in need of services.

“They even had challenges coming here at council meetings as some wards are away from council offices,” said Chibhi.

Ward 3 councilor Sarah Mandiki praised the local authority and fellow councilors on the initiative saying it helps them reach all the corners of their.

“As a woman it was difficult for me to travel on foot around the ward, but now I can reach every corner.

“Some of the people used to complain that I don’t attend to funerals and other events in their areas but now it will be a thing of the past. They will see me everywhere where I am needed, I will attend to emergencies on time,” said Mandiki.

She said she was not afraid that people will accuse the local authority of misusing the rate payers’ money as the motorbike will increase her visibility in the ward.

“The President has always been saying development should start at grassroots level and with these motorbikes we will ensure that.

“The bikes will help us travel around attending to issues as well as giving information in our wards,” said Masakadze

He said they were going to pay for the bikes on monthly basis so people should not worry that they are misusing funds.