Sludge in the taps 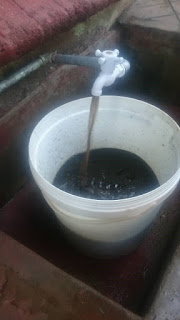 Very poor-quality water like never seen before began coming out of taps in Masvingo this week after council announced a rare cleaning exercise at the city's water reservoirs and some supply pipes.

In many suburbs, extremely dirty water which was filled with sludge and unfit even for laundry came out of the taps for four days.

Some sources privy to the cleaning exercise told TellZim News that a council employee had either mistakenly or negligently let thousands of litres of clean water into one of the tanks which was still being cleaned, and council was left with no option but to pump the sludge into homes to avoid losses.

City of Masvingo announced that it was going to clean the water reservoirs over Target Kopje suburb, and the main supply pipes from the Bushmead Water Works in order to boost water quality but little did residents know that they were to grapple with sludge coming out of their taps.

A source from the city council said water was pumped into one of the tanks before the cleaning exercise had been completed.

“There was a mistake when water was opened into one of the reserve tanks before the cleaning work had been completed. This is the water which was coming out of the taps during the past week,” said the source.

City of Masvingo engineer Tawanda Gozo said he had expected the quality of water to revert back to normalcy much earlier than what was reported to have happened in such suburbs as Rujeko C.

“We recently cleaned our main water pipes from Bushmead Water Works and the reserve tanks to improve water quality.

“We have received reports that in some areas extremely dirty water was coming out from the taps but that was most probably due to the normal cleaning exercise.

"The water quality should have improved earlier and I am surprised to be told that it is a different case in some places. We are ready to investigate,” said Gozo.

Masvingo’s daily water demand has risen to about 50 megalitres a day while the council has a pumping capacity of around 30 megalitres.