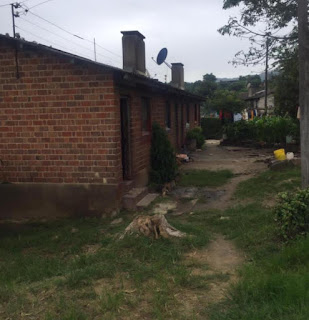 MUTARE - In a sweltering afternoon, 37-year-old Ziviso Christine Masinire sits on a mat with several pairs of secondhand shoes scattered all over her rented block in Maonde section of Sakubva.

As she looks on the screen of her simple Android mobile while waiting for the next prospective customer to pass by, memories of her former fruitful ‘ice lolo’ business initiative come back to her mind.

Masinire is one of the many residents of Maonde section of Sakubva whose blocks of flats were disconnected from the national power grid by the Zimbabwe Electricity Transmission and Distribution Company (ZETDC) in October 2020.

According to Mutare City Council, ZETDC disconnected power after some residents tempered with the wiring system which the power company then condemned.

The electricity company had also noticed that residents of the hostels were abusing the privilege of having a non-prepaid power system at their places to rent cooking spaces to restaurant owners who boiled such intensive power consumption foodstuffs as beef trotter and beans.

This challenge, coupled with the Covid-19 induced lockdown which resultantly came with restrictions in the movement of people, has led to local business initiatives going down thereby making life a lot harder than before.

Ice lolo is a travesty of ice cream created out of a mixture of baobab juice with other additives like sugar and milk.

The ice lolo business has over the years taken most high density suburbs by storm, with brisk business experienced in summer where the low income earning customers need affordable refreshments.

Masinire’s husband is unemployed and he helps support his family on whatever little he gets out of menial work done on a daily basis.

With two children of primary school going age and Masinire’s two adolescent nieces to feed, the family is finding the going getting tougher by the day.

"We have a big family to look after and it’s not easy for parents who are not formally employed to survive this lockdown. It requires a lot of creativity and innovation thus how I came up with an Ice Lolo business initiative but it’s no longer working because we don’t have power anymore," she said.

The Covid-19 induced lockdown saw lessened pressure on the national grid as many power-intensive factories closed down, meaning load-shedding for households became a thing of the past.

However residents in Maonde have never enjoyed this lull in load-shedding as they have been disconnected from the grid for over three months now.

Without electricity, many women are now under serious economic pressure as many of their economic initiatives can no longer be carried forward.

Masinire recently attended the Zimbabwe Council of Churches (ZCC) local peace committee duty bearer meeting where she regretted the loss of her business.

"We earned a living through selling home-made refreshments and other food items but the absence of electricity means we are no longer able to do the business. We survived by selling ice lolo's, freezits, traditional maheu and chicken cuts but such initiatives are no longer possible.

"Ice lolo production enabled me to buy soap, vegetables, meat, children's wear and sending my children to school. We have been living in abject poverty but power shortages in Maonde have worsened it," she said.

At the peak of her ice-lolo business initiative Masinire had a busy schedule and she diligently worked long hours in order to make ends meet.

At the initial stages of her business initiative, she would produce baobab fruit pulp in a large bucket and would often sleep at around 01:00hrs as the job of preparing the ice lolo mixture and packaging it for refrigeration would take many hours.

At first, Masinire used yoghurt containers for the packaging but she soon made use of small plastic sachets to save space in her upright fridge.

She produced 1000 packs of ice lolos which earned her US$10 on a daily basis, with each pack pegged at price of five South African rand, translating to US$300 per month.

"I had a big and ready ice lolo market at Sakubva Musika and Mutare's Central business district. My two buckets full of Ice lolos will be finished in a short space of time since I ensured customer satisfaction through maintenance of good quality.

"I stopped this venture after our fridge ran out of gas and unfortunately our blocks of flats were disconnected from the electricity grid. I however managed to raise capital for the shoe business which however does not offer as much quick returns as ice lolo business," said Masinire.

She said the disconnection of power from their blocks of flats had had other forms of negative impact on families for instance the absence of any home entertainment for children.

When contacted for comment, Mutare City Council public relations officer Spren Mutiwi said Maonde residents were paying a total of $21 for rentals and other utilities, an amount which was not enough cater for their electricity requirements.

"Council was effectively subsidising Maonde electricity bills because $21 is not enough to cater for other charges. It literally means they were paying nothing for electricity.

"Some of the residents were not even paying that nominal fee and there are rental arrears amounting $200 000," Mutiwi said.

Mutiwi urged Maonde residents to pay their fixed monthly rentals now pegged at about $400, saying this will put the local authority in a better position to improve service delivery.

"All residents should have access to electricity so that they get on with their income generating activities to help families cope better with the lockdown. From what we gathered, most residents had been paying for services to council but council was not remitting to ZETDC what was supposed to be remitted to it,” said Dube.

He said the maters of livelihoods in poor neighborhoods like Maonde must never be compromised for whatever reason as they were matters of life and death for many residents who depended on small business initiatives that require electricity.