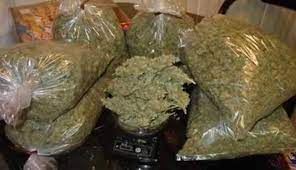 CHIREDZI- A police officer stationed at Ndali police station was last week slapped with a five year jail sentence after being found in possession of 190 kilogrammes of mbanje/dagga which he, together with a female accomplice, was selling.

Sergeant Luckson Munhukwaye (43) and Phyllis Mufandaedza (36) were arraigned before Chiredzi Regional Magistrate Judith Zuyu facing charges of unlawful possession of dangerous drugs under Section 157 (a) of the Criminal Law (Codification and Reform) Act.

The state represented by Moreblessing Rusere stated that Sergeant Munhukwaye together with Mufandaedza were found in possession of 80 packs of loose dagga weighing 190 kilogrammes on February 1 this year after his boss, Assistant Inspector Etwell Ngara, received a tip-off that the two were selling mbanje using Mufandaedza’s house at Masekekesa Business Centre as the base of operation.

According to state papers, a police search party found a plastic of dagga on top of the wardrobe before interrogating one Cynthia Mhuriro, who was found at the house.

Mhuriro provided information that the dagga in question belonged to Mufandaedza who had been taken by men driving a black Toyota Hilux GD-6 Revo after they had identified themselves as detectives.

Ngara and his team left the house in search of the vehicle and along the way passed a Toyota Noah Voxy heading to Rupangwana Business Centre and was being driven by Munhukwaye with Mufandaedza on the passenger seat.

Upon suspicion, they made a U-Turn and a hot pursuit started resulting in the arrest of Munhukwaye and Mufandaedza.

Ngara and his team searched the car and recovered a bag full of mbanje which Mufandaedza and Munhukwaye disowned.

In his defense, Magaisa said Munhukwaye didn’t know dagga despite serving in the police force for almost 18 years and believed he was carrying a bale of second hand clothes.

Magistrate Zuyu said she was not impressed by the defense of Munhukwaye and that the evidence before her was enough for a conviction.

“I am not impressed by his defense. The evidence before me is enough because the way the dagga was packed shows that it was for commercial purposes.

“Dagga attracts a lot of money in the market but has negative effects and him being a police officer of 18 years of service should have known better,” said Magistrate Zuyu