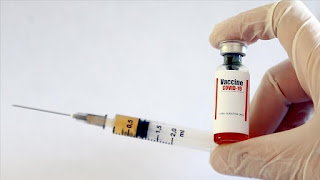 Masvingo received a total of 22 000 doses of the vaccine enough to vaccinate 11 000 frontline workers.

The province is now in the second week of the vaccination programme and sources say the number of people inoculated to date is worrying.

Masvingo began vaccinating the frontline workers on Monday, February 22 and by February 28, a total of 1 938 had been vaccinated in all the 7 districts.

Sources within the Covid-19 provincial taskforce told TellZim News that the Provincial Medical Director (PMD), Dr Amadeus Shamhu, ordered an end to the daily updates of the vaccination owing to the low turnout.

Dr Shamhu has not been forthcoming with the media since the outbreak of the Covid-19 pandemic in the country and has proven difficult to get a hold of on all related matters.

The last vaccine roll up updates were released on Day 6, February 27 and no update has been given to members of the public to date.

Dr Shamhu could not be drawn into comment as his mobile went unanswered and could not respond the questions send to him on WhatsApp though he blue ticked the message.

A Covid-19 provincial taskforce member who spoke to TellZim News on condition of anonymity said he was surprised that the PMD ordered the point person, who was designated to collate and tabulate the information from districts and distribute it to the public, to stop sharing the data.

The taskforce member said that a lot needs to be done to educate people about the vaccine saying the statistics of the vaccine uptake was worrying.

“The statistics of the vaccine rollout programme was shared on daily basis. The PMD as a member of the provincial Covid-19 taskforce was in charge of that and there was a person who was designated to do the collating and tabulation of the data under the supervision of the PMD.

“The data was presented for only six days and all of a sudden it stopped. This is because the numbers are very low and publishing the statistics would do more harm than good.

“I went to inquire from the point person and he told me that he was ordered to stop reporting the data on the orders of the PMD.

“I phoned the PMD and he did not take my calls. I send him WhatsApp messages and he saw them but he never responded. As a taskforce we agreed that information should be made public so that decisions will not be made based on speculations.

“The public is in the dark as to how the vaccination roll out programme is going and how many people have been vaccinated to date,” said the taskforce member.

As of Day 6, Zaka district had the lowest numbers of vaccinations standing at 68 while on February 27, only 4 people were vaccinated by the four groups of teams dispatched to cover the whole district.

Minister of State for Provincial Affairs and Devolution, who chairs the provincial Covid-19 taskforce, was vaccinated on Day 4 of the vaccination rollout programme and called on all frontline workers to embrace the first phase which has been exclusively designated to them.

Many Zimbabweans say that the government has not provided enough information on the SinoPharm vaccine.