The circus is in town 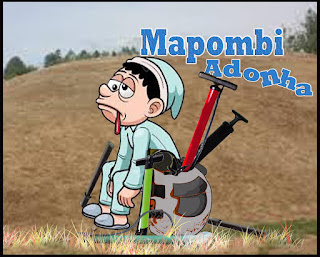 Yakabhurwa, yakabhurwa. Makazvinzwa here kuti yakabhurwa kkkk. Mapombi is here and I hope I find you dear readers in good health but just a reminder, yakabhurwa spread the message kkkk. I am not a soccer fan but I have come to respect the fact that some people support their football teams like some support Zanu PF and MDC. I am sure that all Manchester United fans are hoping that vanowana yavanobhurawo as a consolation because the shame is just too much. Why is it that people are laughing at Manchester United as if it is the first team to be trounced? Kubhura nekubhurwa kunowanikwa.

There are still a lot of people including Mapombi who still do not know kuti mubhuri nemubhurwi in the 2018 elections aiva ani. Some say Chamisa akabhura ED but ZEC gave us a different result while others believe that the young man akabhurwa and the results we got from ZEC were very accurate. I will not delve much into this matter because I know it is very sensitive and machinja are still hurting a lot over the result.  People must come to terms with the reality that once there is a race, there is bound to be a winner and a loser. Both parties must accept the result in the end and be able to live with it. So I say to all Manchester United fans, do not despair for the misery inflicted upon yourselves and club will come to pass.

I am happy that our beloved First Lady was in town. Yes, I mean amai vedu vanotichengetera baba. Our angel of hope, Auxillia Mnangagwa. This is the woman whose husband is getting his Covid-19 jab in Victoria Falls. I do not know why ED chose to get jabbed in Vic Falls and not in Harare or kuno kuMasvingo like what Matemadanda did. Masvingo ine musvo wemusangano so everything should start here in Masvingo. Maybe ED chose Vic Falls because he was given freedom of the city status there. Plus zvinhu zveHarare zvine chitsotsi too much. You can never trust the jab administered in Harare kkkk. Hararians are like the Chinese, unoisirwa mvura ukanzi its vaccine. So, Auxillia was cooking her traditional foods at Masvingo Poly and I really have nothing against traditional foods. But shuwa Auxillia angabva Harare kuzongoona mashazhare akabikwa ane dovi, mufushwa, minyemba and other foods we eat on daily basis. The resources used on the trip could have been used to buy food for vana Mapombi tabaikwa with rotten bananas and maputi.

Traditional foods are the reason why the late president Mugabe managed to live so long and had a vision to get to 100 years but his vision was cut short by his comrades who usurped power from him and threw him into serious stress mode which led him to his grave before realizing his vision. Mugabe aingoga kusvika muzana chete and he did not care about anything else. The economy tanked and he just had his eyes on age 100. So I hope ED is not being pampered with traditional foods because to be honest hatidi zvekunetswa kkkk. Munhu ngaadye fast foods kuti akasire kubaya. I am not saying that ED anofanira kubaya because chinouraya inguva. Rest in Peace Cde Joseph Magufuli. I think someone was happy to receive news on the death of Magufuli because dzanga dzanyanyisa kugara munyika. Ko Cde Tongombeya vanga vasingagari pasi. It was like he had thorns on his back and he was always in the air travelling chopping the tax payers money.

I don’t know why the good are always the ones dying kuchisara vanotishungurudza ava. In Zimbabwe we can only wish death on our tormentors because it is the only recourse we have. We have tried elections and they have failed. Covid-19 came and it still missed the target. Some people pray daily for God to take vana Emmerson and unfortunately the Almighty gives people time to repent before he takes them home. Vana Magufuli fought their fights and he was mourned by the whole country. I could see people wailing in the streets saying they had been robbed of a true statesman. Well who will dispute that because we all know what Magufuli did when he got into office? There was no room for incompetence in the Magufuli administration and Mapombi can safely say Tanzania and Africa at large have been robbed of a great man. Magufuli did not take unnecessary foreign trips to cut on government expenditure. He put Tanzania first and managed to transform his country into a lower middle income economy. Isu kuno vana Mapombi takangomirira Vision 2030 kkkk.

The problem with Zimbabwe is that we do a major disservice to ourselves. How are we ever going to achieve anything without proper people representation? How can a political party just fire representatives of the people just like that? The country has suspended all electoral activities indefinitely and yet we still allow the wanton recall of voted representatives because of petty issues. If the country is not yet ready for by-elections then we should not let political parties recall elected members. Mapombi does not believe in representation democracy because it underlies the absence of the people. Democracy can only exist in the presence of the people and not in the representatives of the people. But since we are a representative democracy, we have to make sure that our people are represented not this circus we are seeing. What will happen to those constituencies that had their elected representatives recalled from councils and parliament? Recently, the most vibrant legislator Tendai Biti, who kept the Zanu PF goons on their feet was recalled from parliament by one Chikanda. How can a nonentity like Chikanda remove Biti from parliament at a time like this? Chikanda chei chaicho chimuchinda ichi. Chikanda chemvuu chaicho kkkk. We are not going anywhere as a country I tell you. Biti was a very important cog in that Parliament and without him there will be no one to hold the government to account.

We should not let this circus take root in our politics. This makes us a laughing stock on every turn. How can someone arohwa nekangopisa just think of recalling an Honorable Member of Parliament and is allowed to do so. The people must be the only ones who should be allowed to recall their MP or councillor and not some stupid Chikanda guy or Mwonzora for that matter. The speaker of Parliament must not just take stupid directives from stupid people like Chikanda and his so called PDP party whose actions turn the August House into a kindergarten. We need to be serious as a country and political parties. People should not be taken for granted. There should be tighter conditions put in place to stop such madness from happening. To just say a member has stopped serving the interests of his or her party are not sufficient grounds to recall an elected official. After all, they are not there to serve the interests of the political parties but the people. This madness must stop or Mapombi anouya kuzobhura vanhu especially vana Chikanda imi. Makanditsamwisa mhani vanhu imi. I have said enough regai zvangu ndinokanga maputi angu for lunch. Mboko imboko.