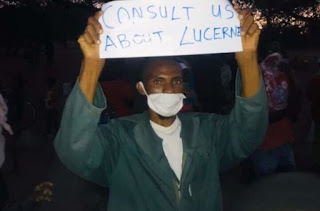 Shangani people from Chilonga, through their lawyer Tendai Biti, have filed an urgent chamber application with the High Court seeking to reverse the 120 year old law on land ownership.

MDC Alliance vice president Biti announced the move on his twitter handle @Biti Law Chambers a few weeks ago saying they had filed an application on behalf of the Hlengwe Shangani  people seeking to  reverse a colonial legal order that says communal land is state owned and individuals cannot claim entitlement to it.

“We are proud to report that on the behalf of the Hlengwe Shangani people of Zimbabwe Lowveld, we have filed a land mark application seeking to reverse 120 years of a colonial legal order which states that an African cannot own land in communal lands,” reads the tweet.

Alex Magaisa, a prominent lawyer and political analyst also commented on the issue through his twitter handle saying the Communal Land Act was in violation of the constitution in several ways.

“The Big Saturday Read (BSR) argued that the Communal Land Act violates the constitutions in several ways and should be repealed or challenged. Pleased to see leading human rights litigation firm @ Biti Law Chambers challenging this law which is fundamentally based on colonial constructs,” reads the tweet.

Communal Land Act says land shall be vested in the President, who shall permit it to be occupied and used in accordance with the Act.

One of the applicants, Livison Chikutu, from Chilonga told TellZim News that the government has been dodging them for a long time since it failed to address the Chilonga evictions.

Chikutu said it was very difficult for them to fathom the idea of having to be forced to vacate their ancestral lands saying they had been evicted from other areas and cannot remain nomads.

“The problem is that the government is not following our history because we have been shifted from different areas such as Gonarezhou, Triangle, Hippo Valley and Malilangwe and finally settled here a long time ago.

“Our fathers were not compensated when they were moved to this place just like what they want to do with us,’’ said Chikutu.

However, in a WhatsApp group that consist of people from Chilonga, people were expressing mixed feelings over the whole issue with some voicing their anger against the lucerne project which is posing an eviction threat to them while others were saying the project was beneficial.

One participant said if the project was meant to benefit them, they would have been consulted and not a selected few to make decisions for them.

“From what we know, if projects are coming in the community, people in that community are consulted and agree but now we are being forced to agree to what they want.

Others said that the problem was that the selected representatives were sell-outs.

“In all the meetings that are being held about this project, we are represented by the very people who like the project to continue and none of the critics is allowed into the meetings. Those who represent us, the likes of Chadzamira, Masiya, Gwanetsa and Masosota are all in support of land invasion and community eviction.

“Why not forcing us to do sugar cane projects? At least that’s better for us as we have failed to get an earnest share of the sugar cane farms as Tsonga people for they are within our territory,” said another participant.

A few weeks ago, Chadzamira held a meeting in Chiredzi to address the issue but chiefs and only selected individuals attended the meeting and the rest were turned away.

Yesterday, a high powered government delegation led by local government minster July Moyo and minister of agriculture Dr Anxious Masuku had a meeting with the Chilonga local leadership to try and get community buy in.

Moyo promised that no one would be evicted from their lands but a few individuals whose homes fall in the way of the irrigation scheme would be moved with the families getting compensation.