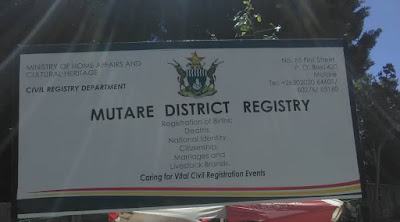 MUTARE- Despite going for over a year without any activity due to the Covid-19 induced lockdowns, the District Registry office here is reportedly processing only 60 national Identity Documents (IDs) per day against a huge demand.

Manicaland provincial registrar Joyce Munamati said she could not issue a comment on the matter.

The Conscious Development and Empowerment Trust (CODET) together with Election Resource Centre (ERC) have since written to the District Registry Office expressing deep concern over a small number of IDs being processed despite the office having been on a long sabbatical.

The two civic organisations bemoaned the snail pace at which the registry office was processing identification documents saying this will have debilitating effects on the number of youths who will be eligible to vote in elections.

CODET and ERC requested the District Registry's office to ensure that IDs were made available to all as stipulated under the confines of the law saying if the process was not expedited it would have a ripple effect on people's rights to electoral processes.

"Identity documents are a constitutional right, essential for one to claim their right to Zimbabwean citizenship, to be able to participate in the socio-economic and political development of the country and for one to be able to register to vote.

“The approach taken by the District Registry to only assist a specific number of people per day disenfranchises citizens and has a direct bearing on the ability of the populace to participate in electoral processes," reads part of the letter which was directed to Mutare District Registry office by CODET and ERC.

CODET director Vimbai Berete told TellZim News that they were calling on Mutare Registry's Office to expedite the process of accessing IDs or Birth certificates so that citizens can access their documents without any unnecessary delays.

"People are booking to access services and those who booked on April 13 can only access the services on May 11. This means that a person will have to wait for four weeks in order to get an ID or Birth certificate.

"This is inconsiderate since the office has not been operating for a very long time due to lockdown restrictions leading to a large number of people in need of IDs. This has a possibility of infringing on our constitutional rights.

"We are pushing for more young people to register and vote but without their national IDs they cannot be active members of society.

“People are incurring a lot of transport costs as they will be given a later date of which they would have travelled from very long distances for their Identification documents to be processed," said Berete.

As 2023 elections are fast approaching, political parties have found themselves in a race to win the youth vote which is believed to be the game changer in the upcoming elections.