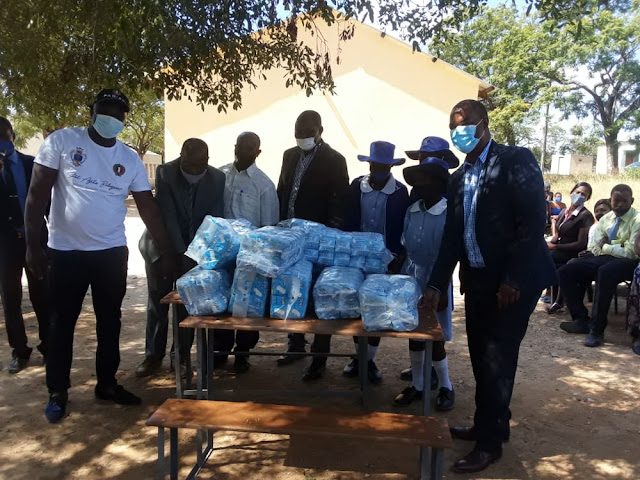 The school, where the President did his primary education, was affected by hailstorms last year (2020) which destroyed roofs and furniture mainly tables and benches.

The government intervened and reroofed the blocks which were blown away but furniture remained a problem at the school.

During his visit to the school, Zivhu donated 100 two-seater benches to the school which has an enrolment of 539 pupils.

He also donated sanitary wear for pupils at Dambudzo Secondary School as well as women who were present.

He had earlier on donated paint which was used to paint the roof of a classroom block and a teachers’ house.

Speaking during the handover ceremony, Zivhu said he was heeding appeals for help by the local MP Dumezweni Mawite of Zvishavane Ngezi constituency.

“I started donating to schools in 1995 using the money I had worked for in Chiredzi for only three months and people laughed at me but look where I am now. Your MP called me as his friend and I promised that I will help and that’s why we are here now. I implore you as parents to do the little you can to the school,” said Zivhu.

He said he remained Zanu PF in flesh and spirit, and he will continue to support President Mnangwagwa’s Vision 2030 despite being expelled from the party.

“I support the President’s Vision 2030 and I am still Zanu PF. We all are, and that is why I am here with my friend who is your MP,” said Zivhu

Zivhu said his expulsion from Zanu PF was just like a child who gets chastised by his father for mischief.

“If a son is chased from home it does not change his surname. One day, he may be called back to find that all those who have been cheering when he was getting chased away have also offended the father and have been chased away also,” said Zivhu.

Speaking at the same occasion, Mawite said he was happy that his friends have heeded to his call and are supporting him and urged the parents to provide labor to develop their school.

“Government has intervened and other stakeholders are still coming in. That is why my friend Zivhu is here. So when we help like this, we need to also provide labor because the school is ours, we don’t have to wait to be paid to develop our school,” said Mawite.

Lundi Primary School head, Tariro Nyoni said when he came to the school last year, there were no benches as they had been destroyed in the storm.

“I thank the government, our MP and his friends who have come to our rescue and we urge them to continue supporting us. I am happy that you are walking the talk on the President’s philosophy of less talk and more action,” said Nyoni

He said the school was still in need of another classroom block and more decent teachers’ houses.