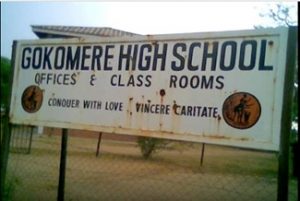 A Gokomere High School pupil is recovering from a dislocated shoulder after a savage assault by mission guards who accused him and others of being in the wrong class at the wrong time, TellZim can report.

It is, however, the brutality with which the corporal punishment was meted out on form six pupil Tino Mashava which has seen some parents calling for the guards to be held to account.

Gokomere Mission priest-in-charge Fr James Magadzire did not pick the many calls on his cellphone while school head Aquanos Mazhunga professed ignorance of the case.

“I didn’t know that such incident happened at the school. I will have to confirm with the others and come back to you,” said Mazhunga but he never did.

Many sources, however, said it was Mazhunga’s usual way of avoiding explaining issues that are inconvenient to him.

Circumstances are that the Statistics subject, which is compulsory for the class, was not on the timetable, and some teachers organised that one of them would take the class after hours so that pupils do not miss out.

On April 15, one teacher took the pupils to the dining hall for the Statistics lesson but they were later interrupted by mission guards and some school authorities who ordered that the pupils be beaten right in front of their teacher for conducting lessons at the wrong time and place.

“The whole class was subjected to severe corporal punishment which saw one of the pupils Tino Mushava dislocating his shoulder. The school authorities tried to sweep the matter under the carpet but they failed because the injuries required the doctor’s attention which the mission clinic could not give,” said a source.

The school head and the priest-in-charge are said to have persuaded Tino’s parents not to take the case forward, with promises that the school would foot his medical bills but they had not fulfilled their promise by the time of going to press.

Meanwhile, Tino has accrued hundreds of US dollars in medical costs as he is being attended to by a private doctor in Masvingo.

His mother Vimbai Mashava refused to talk about the issue, referring TellZim back to Mazhunga and Magadzire.