Home » Sport » The wait is over, welcome back Zim football

The wait is over, welcome back Zim football 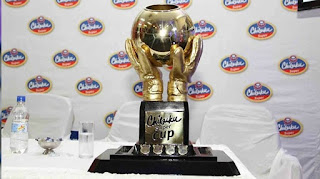 After over a year of no domestic action, the Premier Soccer League (PSL) is back and will commence with the prestigious Chibuku Super Cup which will run from Saturday, May 22, up to July 31.

Although fans are not allowed in the stadia, they will have to cheer their beloved teams from the comfort of their homes on Zimbabwe Television Network (ZTN) and Zimbabwe Broadcasting Corporation (ZBC) TV.

Here is a look at the four groups and an analysis of the team’s and this weekend’s fixtures.

Only two top teams from each group will make it to the quarter finals.

This group will be situated in Harare and will use the giant National Sports Stadium for all its matches.

The six teams will lock horns in what seems to be the group of death for the Chibuku contest.

Zimbabwe’s most successful football club in terms number of trophies, Dynamos, who face Herentials on Matchday One, seem to be the favourites to come out tops if their form against Highlanders in the Uhuru Cup is anything to go by.

Dembare, as Dynamos is affectionately known, will bank on the experience of Captain Patson Jaure who came back from Manica Diamonds, as well as versatile player Godknows Murwira.

Caps United will also be in full force and have a relatively strong side, with the likes of Blessing Sarupinda, Ronald Chitiyo and Leeroy Mavhunga who can cause all sorts of problems.

Innocent Benza, the oldest player in PSL, who is the owner and vice-captain of Herentials, has reportedly demanded a win over Dynamos as a birthday present after he recently turned 49.

However, anything is possible in football, Harare City the cup’s 2015 winners, Yadah and ZPC Kariba, may not be a walk over in this big group.

This group will witness what proves to be an all-Bulawayo team set-up, as the clubs, that are all based in Bulawayo, battle for the top two sports at Barbourfields stadium.

Bulawayo giants and the Cup’s defending champions Highlanders will ride on their name and use home turf advantage since they have used the venue more than any other club in the group.

The Joey Antipas coached side Chicken Inn will be without their priceless gem Clemence Matawu in the middle of the park after he hanged his boots, but was returned to take up an administrative role at the club.

Stubborn Bulawayo Chiefs, who recently launched their ‘Amakhosi Wear’ kit to become the first local club to produce a kit brand, will definitely seek to upset the big guns.

Bulawayo City is an average side which may turn things upside down if the giants get too much comfortable.

This groups first fixtures will see Bulawayo City play the Game Cocks on Saturday while Highlanders and Bulawayo Chiefs tussle on Sunday.

Recently upgraded Sakubva Stadium will be a hive of thrillers as army side Black Rhinos and Prisons side and debutants Tenax fight to collect maximum points on Saturday.

Tenax, which has not made any headlines on the market, will be raring to have a good start but Rhinos, aka Chauya Chipembere, who are famed for upsetting many big teams, might be a huge task for Shadreck Mugurasave who will be seating on the bench.

Johannes Nhumwa, who will be starting a new season with Manica Diamonds, will have a dance in the cup against Midlands-based and army side Cranbourne Bullets who are also this year’s PSL debutants.

Nhumwa took over from Luke ‘Vahombe’ Masomere who had trusted him to be his lieutenant but many conspiracy theories surrounded Nhumwa’s rise and the fall of Masomere at the Mutare-based side which he guided to an impressive fifth position finish in 2019.

Although they have not been parading diamonds like what they did in 2019, the Gem Boys have tied down a few players including speedy forward Michael Tapera who joined from Masvingo United after an impressive season.

Tapera, who was on fire at the Mucheke-based side, impressed Nhumwa in the Manica Diamonds Cup which they eventually won against Tenax in the final and was named the Young player of the tournament.

If experience is anything to go by, Rhinos might be the favorites to proceed to the next round while Manica Diamonds have the best market value and highly-rated players; more than any other team in the group.

The 2019 league Champions FC Platinum will have home advantage as they host Ngezi Platinum, Lowveld side Triangle United and Prisons side Whawha at their Mandava base in Zvishavane.

Pure Platinum Play, as FC Platinum are affectionately known, will be the team to watch as they have been Zimbabwe’s champions for the past three years and might want to extent their dominance in the Chibuku Super Cup.

FC Platinum last won the cup in 2014 and will be itching to progress to the next round but they have to deal with Whawha first on Saturday.

However, the Norman Mapeza side will have to do without Donald Ngoma, Donald Chinya and Blessing Muwoyo who are out injured.

Another force to reckon in this group will be Ngezi Platinum aka Madamburo who have a much stronger side.

Madamburo’s tried and tested midfielder Devon Chafa will want to win his seventh career title while rejuvenated striker Denver Mukamba will be out to prove critics wrong.

Triangle are not new to this tournament and have won it in 2018 when they beat Harare City 2-0 in the final.

They will be seeking the tourney’s glory once again and head coach Taurai Mangwiro will surely go out in full force to try and progress to the next round.

This stage will see Group 1 winners play Group 3 runners up while the Group 3 winner face Group 1 second placed side.

The other quarter final matches will pit Group 4 winner and the second placed team in Group 2 while Group 4 runner up play the team which finishes first in Group 2.

A semifinal draw will be done after the quarter final matches are played to determine who faces who ahead of the grand finale which will be played on July 31.

The ultimate winner will pocket US$75000 which will be paid using the day’s official interbank prevailing rate.